I didn't feel like programming items, well to be honest, I am a bit stuck on the looting system. Not really sure how I want it to work. So I added something else that I had planed on doing later as it wont add anything game wise, but looks good. Well it would if I could draw.

I added overlays to floor and both walls. It's a small image that get's drawn over the floor or walls to add variety. It creates a sens of the walls being different without actually having different walls.

It didn't reduce the fps as much as I had thought it would. I only have 1 image for the walls, a drain pipe kind of thing and 1 for the floor a scratch. It's easy to ad more, just draw, add and set how much it needs displacing when drawn. 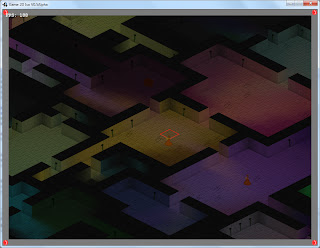 I know there are to many drain pipes, some of them will get replaced with other images as they get added.